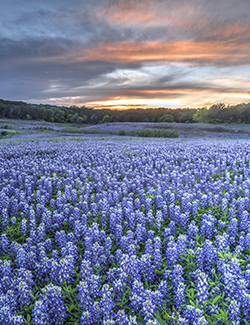 Today, March 3, is World Wildlife Day, so I thought it would be a good time to talk about our upcoming production of YANA WANA’S LEGEND OF THE BLUEBONNET. Of course the obvious connection is that the bluebonnet is the Texas state flower which grows wild in fields and along freeways during the spring. They are protected in that you aren’t supposed to pick them, although I’m sure there have been a few lost to Texas toddlers having their photos taken in the midst of them. But there’s a deeper relevance to this day and the bluebonnet worth your knowing about. 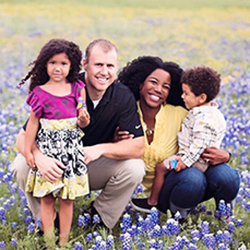 Each year the UN chooses a theme for World Wildlife Day. The UN Secretary-General António Guterres says this day is a time to focus on the role the planet’s animals and plant life play in our cultures and the sustainability of our societies. In our upcoming production, you will definitely have a better appreciation for the connection between the bluebonnet and the first people of Texas. We’re proud to be making history with our world premiere production that both celebrates the Coahuiltecans (kwah-wheel-tek-kuhns) – the first people to originate in Texas 14,000 years ago – and introduces to everyone their contribution to our history, their relationship to the plants and animals that roamed our grounds, and their impact on our current existence. 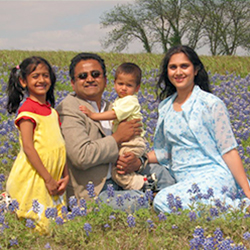 In addition to these reasons for seeing YANA WANA’S LEGEND OF THE BLUEBONNET, I think we’d all agree that pre-teens are their own form of wildlife. As a mom with my own burgeoning set of teens, I feel comfortable saying that. In our show, ten-year-old Maria is taken out of her normal habitat (which includes having a screen in her hand 24/7) and is transported to her grandmother’s home in Laredo for discipline and perspective. There, away from the normal distractions, Maria eventually commits fully to a world in which wildlife is both sacred and essential to living. In doing so, she learns of her unknown ancestral connection to the bluebonnet. It is a beautiful tale that illustrates the power of ancestry, the value of one’s own story and the importance of precious natural resources such as water, and yes, bluebonnets.

As a non-Texas native, the bluebonnet was new to me, and I was amazed by how Texans still revere the beautiful spring bloom. But the more I’ve learned about the bluebonnet and its significance to the original people of Texas, the more I wish I had spent the time other parents invest in permanently capturing the young kids amid a full field of bluebonnets. There really isn’t anything quite as beautiful as the purplish little towers that blossom so perfectly. They’re unlike any flower I’ve ever seen. It is fitting that they are so significant in Texas, today, and in our history. 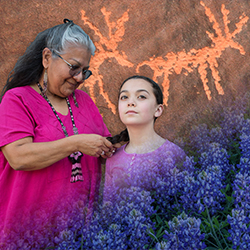 You’ll find out more when you join us for YANA WANA’S LEGEND OF THE BLUEBONNET. Even if you read a book by the same name in school like most Texas students, you’ll want to check out this story. Historic in a number of
ways, we’re just willing to bet that you’ll walk away with a newfound appreciation of water, bluebonnets, your ancestors and a whole lot more.

Written by Sherry Ward. Sherry is a mother, actor, and writer based in D-FW.

YANA WANA’S LEGEND OF THE BLUEBONNET runs March 23 – April 8. There are only a few public performances, so please don’t miss the opportunity to share this important part of our collective history with your family.

First photo sourced from stock photography. The photos of the beautiful families posing among the bluebonnets were sourced from the following personal websites: lcahouston.com and cherish365.com. Final photo by Ulises Garcia.