Uplifting and joyful…that’s how the play was described by someone who had the benefit of seeing DCT’s National Touring Company present MUFARO’S BEAUTIFUL DAUGHTERS: AN AFRICAN TALE in Colorado a couple of months ago. I recently had the pleasure of hearing the composer, S’ankh Rasa, and the choreographer, Michelle Gibson, discuss the role theyplayed in bringing this magical production to life. Talk about a celebration of culture!

Both S-ankh and Michelle spoke about Africa in great detail; from the musical instruments to the traditional dances, to the spiritual elements, and so many of the details present in the story of Mufaro’s

daughters, Manyara and Nyasha. Both S-ankh and Michelle are such large personalities that just hearing them speak had an infectious rhythm, and as they spoke of Africa, they both used the term “magical” several times, and by the end I was ready to go. At the very least, I was ready to get up and dance.

o the show. S-ankh has a direct West African ancestry and travels to Africa pretty often. He knows all the traditional instruments in addition to being a prolific musician in general. When director Robyn Flatt asked him if he could create music for MUFARO, he shared that he had been reading that book to his own daughters for years and was excited to do something “truly African.”

best time listening to him talk about a story so familiar to him. When I, as a blue-eyed white woman see a poster for a play like MUFARO, I’m often quick to jump to thinking it’s not for me; that I can “sit this one out.” But as I heard S-ankh talk about the relationship between the sisters and also the way he worked with the actors to ingrain the traditional instruments into their characters and their bodies, I related on so many levels – both as a parent and an actress. The story of the family is true to life with just the right amount of fantasy, and hearing about the process of preparing the actors revealed their blood, sweat, and tears devotion to this project. S-ankh even told one of his actors to sleep with his instrument. I must see this show.

Then, of course after watching Michelle, I was transfixed and quite smitten.

She is a preacher’s daughter from New Orleans who moved to Dallas after Hurricane Katrina, so she has her own story to tell. She shared that she connected on such a spiritual level with MUFARO. I am not a dancer, but as she spoke, it was immediately apparent that dancing runs through her veins, and has been a part of her entire life (despite her father’s plan for her to play piano). Her friend, S-ankh, is the one who asked her to choreograph the production; she read the story of MUFARO and immediately loved it.

Both of these passionate

artists spoke of the tradition of storytelling, and how important it is to humankind, and specifically how important it is in the African tradition. Then they both talked at length about the story and its lessons, as each character explores their identity and learns to support each other. They also made note of the “authentic-ness” of the story, and then of course talked about their excitement to bring this story to the stage.

I grew up in the southern United States, where women sitting on the f 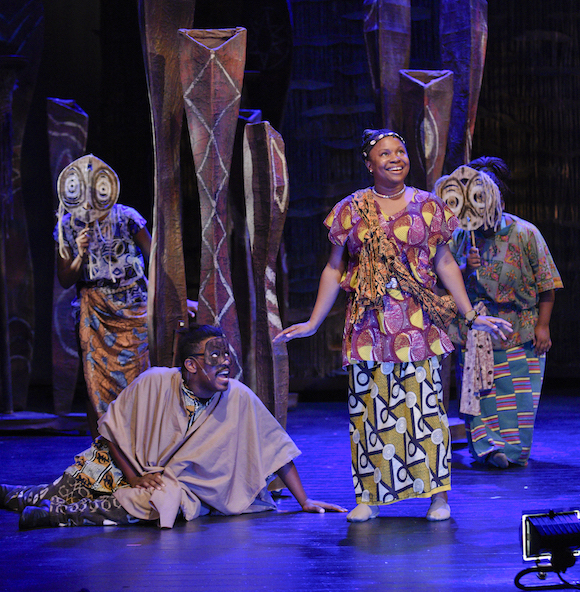 ront porch with their iced tea gossiping was a very common thing. Michelle made a comparison of that to the way women in Africa build a community around the events of the day, knowing each neighbor and sharing communal experiences similar to those she experienced in church as a preacher’s daughter.

The more they talked, the more I felt like this was a community that I could be a part of, and one that I definitely want to share with my family by bringing them to this production. Michelle talked about the “bantaba” moment. She described it as the moment when everyone enters a sacred space, and everyone is embraced, and there’s no right or wrong because everyone is a welcomed participant. That is the way acting professionals like to think of the theater.

This is a show for every family, specifically families with young children, brothers and sisters. The music will be new to most of our ears, but I’m imagining a lot of little bottoms bouncing in their seats, and I think that’s okay. It’s going to be hard not to feel this show in our bones. Those drums alone are going to penetrate our spirits, all while telling this beautiful story of a family. I can’t wait to see it.

We’re inclined to go to plays where the characters look like us, regardless of the quality of the professionals attached to the production. That’s a mistake. It’s time to look past the routine and look into the heart of the story, which honestly was hard for me to do before hearing these charming, passionate artists talking about the play, and their experience in creating this play.

See S-ankh and Michelle in action! Click their names to see a video profile.

Sherry Ward is a

Get your tickets at dct.org .