Now that 2015 is in full swing, we are taking some time to celebrate more grand prize winners of our BELIEVE Creativity Contest which we held

last summer.  While we are highlighting eleven winners, I am still struck by the thoughtfulness with which all of our entries created their work.  This was not a school assignment; it wasn’t homework; it was just a living artistic spirit within them that they needed to express.

Some of these kids had to make extra efforts to get their work to us because, as their entry forms told us, they were not surrounded by adults that had time, energy or other resources to help them.  Their work was ultra expressive; fully representing feelings they, and they alone, were experiencing.    It was these pieces that had a lasting impact on us.

Some among these would have been winners, but they were submitted with no names or contact information. Art is personal, and sometimes it’s easier to be anonymous.  If you are one of these young artists, we celebrate you.  You are amazing. 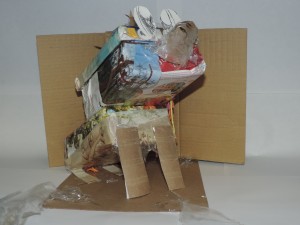 production of TEEN BRAIN: THE MUSICAL.  When we received Zoe Born’s piece, “The Magic of Stories,” it was the first three-dimensional entry we had received, and it actually had a removable layer which revealed what was inside the brain of the unicorn she created.  There were very specific story elements and she demonstrated how her creative mind works. 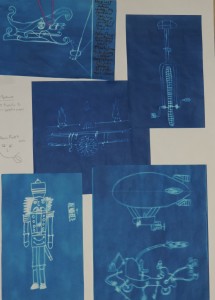 For many of these artists, this was the first contest they were entering. They don’t all want to be artists, but kids are just better at finding ways to light their creative spark.  Adam Roth, for example, very methodically engineered his winning project “Machines” based on shows he had seen at DCT. His unique medium was special light-sensitive paper, and it was unlike anything the judges had seen before. He thinks like an inventor and believes his machines have the power to change the world, and we believe him too.

Teen brains are even more mysterious than Zoe’s unicorn, but Malley Morales gave us a little insight into her motivation with her video project.Malley’s video explains how people can impact other’s choices without even knowing it. She explains, “People say things all the time without realizing who is listening. There have been many instances where I’ve made a choice based on someone else’s opinion, but now I know that to succeed, I need to stick to my own morals.”

So here are these kids talking about morals, inventing machines, and demonstrating the layers of the creative process.  Wow.

This artwork will be on display in our lobby throughout the season, and Malley’s video can be seen on Dallas Children’s Theater’s YouTube channel.

As we look forward to the 2015-2016 season, we already have our wheels turning about what the next contest can be.  We might need to raise the bar now that we’ve seen what young people are capable of.  We have lots of work to do to prepare for next season, so we are fortunate to have talented creative kids who are willing to share their gifts with us.

Until the next contest is announced, we’re looking for more opportunities for families to work on small creative projects together in the DCT lobby before performances.  Look for these during SKIPPYJON JONES and our upcoming production of THE TALE OF PETER RABBIT, and don’t forget to check out our fun to do page here.

Also remember that even when kids and adolescents “outgrow” the need to talk to grownups, they are mastering ingenious ways to communicate that take a little more time to interpret.  It’s sure is worth it, though, to crack that code.  If you need some help, bring that adolescent with their creative gibberish to TEEN BRAIN: THE MUSICAL.

Many thanks to Chooze Shoes and Accessories for providing custom gifts for each of our our grand prize winners.