Movement is being used in a variety of ways to help tell the story of Treasure Island in this reimagined production, so we sat down with Katy Tye (KT) and Jeff Colangelo (JC), founders of Prism Movement Theatre, to understand how physical theater was incorporated into the presentation.

How are movement and combat techniques being used to tell this story?

KT: All acting is movement in my opinion, or should be. However, Treasure Island is a special case because it is a nonstop adventure involving pirates at sea. The pirates in this production all learned or provided different skills to truly embody the work of sailors — like climbing ropes — which adds to the characters and the environment of the piece. On top of the sailing skills, our pirates had to fight, cause… they’re pirates! Jeff choreographed some great fights. Sword fighting, circus work, puppetry all coming together to tell a beautiful story.

JC: Almost every 10 minutes, there’s a new fight scene or circus section or rope climbing or puppets being used to tell this amazing story. And the best part is that almost ALL of it is in the book, [and now it’s] brought to life onstage. If you really want to see a Treasure Island that captures the heart of the book and the true harrowing adventure that Jim goes on, this is the show for you. 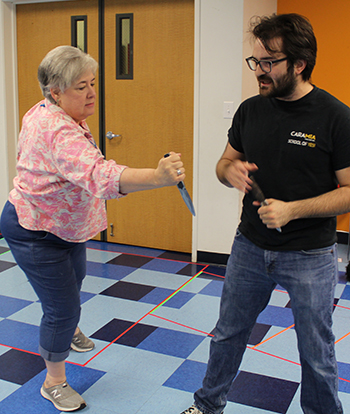 Robyn Flatt, director of TREASURE ISLAND Reimagined! and founder of DCT, said that it’s been exciting to realize the dream of a show three years in the making. But, she says it took compromise to get all the components to find their way on stage. “This show is very visual, physical theater and it needs combat,” Flatt said. “It’s been terrific fun working with Katy and Jeff to tell the story of Jim [Hawkins] and Ben Gunn through physical movement. Katy of course grew up here in the Academy, and I really admire the work she’s now doing with Jeff through their company, Prism Movement Theatre. Jeff staged all the fights in the show, and Katy and I gave feedback. Jeff has been a team player, and been open to feedback. We created a playground and are lucky to have found balance.” 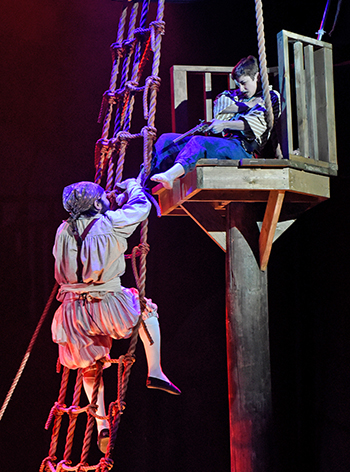 Describe your favorite scene involving either movement or combat, and what went into making it.

KT: My favorite scene involving combat is my fight between Israel and Jim. Jeff choreographed it almost exactly as Robert Lewis Stevenson described it, and it is intense. A pirate is about to stab a boy to death until the boat throws them off balance, and the kid is able to climb up a rope. Once there, Israel throws a knife into Jim’s shoulder climbing up to kill him, and then Jim shoots and kills him. It’s one of the most intense fights I’ve done, and it’s while playing a 10-year-old boy in a kid’s show! Jeff and I are huge fans of magic thanks to our friend and collaborator Trigg Watson, and in our fight, we get to do a little magic together which is so fun! 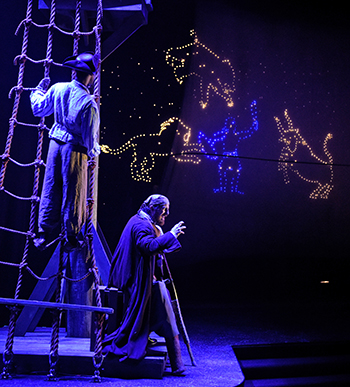 JC: My favorite scene is actually the constellations scene, where Long John tells a young Ben Gunn the story of Orion and the scorpion and those constellations come to life through handmade puppets. There’s just so many beautiful things going on in that scene, from Sally’s puppetry to the construction of the constellation puppets to the acting. Even the lighting and music make that moment so beautiful and impactful for me. The scene itself is so wonderfully multilayered with Long John, a famous, almost mythical pirate of legend, telling a story about a mythical figure that inspired him as a boy. And while [the audience is] being told this beautiful story, Long John is actually using this tale to manipulate those around him to get what he wants. It’s truly an effective and awe-inspiring piece of storytelling from the whole team. 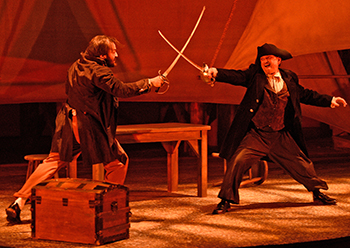 What is most exciting to you about this project? Why do you think families will enjoy this production?

KT: The most exciting thing about this project to me is how much interdisciplinary work there is in the piece and yet none of them distract from each other. The script compliments the movement, which compliments the puppetry, etc. Families will enjoy it no matter what; there is truly never a dull moment. 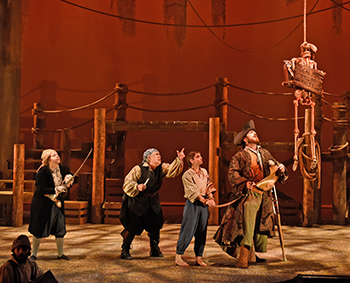 Long John, Jim Hawkins and the pirates are reminded that “dead men tell no tales.”

JC: I think this project is so exciting because it offers a take on the Treasure Island story that doesn’t shy away from the danger that these pirates brought with them on their adventures. At every moment, these people are trying to outwit each other and betray each other to get rich quick, and I think it’s important that this production doesn’t pull any punches in telling that story. By presenting an adventure with truly harrowing danger, it makes the entire adventure of Treasure Island all the more exciting to watch, and it makes adults and kids alike appreciate the happy and beautiful moments of the play even more. In the end, how can you truly appreciate the good things life has to bring if you’re never presented with some of the scary stuff as well?

JC: I think families will absolutely LOVE this production. It brings to life the story of a classic kid’s book in a way that is fun, engaging and extremely exciting. There’s absolutely nothing to be bored by during this play, if the actors aren’t fighting, five minutes later they’ll be doing puppetry; if they aren’t doing puppetry, they’ll be doing circus tricks and so on. This is definitely an exciting adventure that young and old pirates at heart will have a great time at.