When the collaborating companies first started reimagining the classic tale of Treasure Island, each company presented many ideas about how their artistic discipline could best help in telling the most dramatic, compelling and entertaining story. We sat down with Sally Fiorello, Master Puppeteer with Kathy Burks Theatre of Puppetry Arts and puppeteer and ensemble cast member of TREASURE ISLAND Reimagined!, to learn how puppetry helped shape this production. 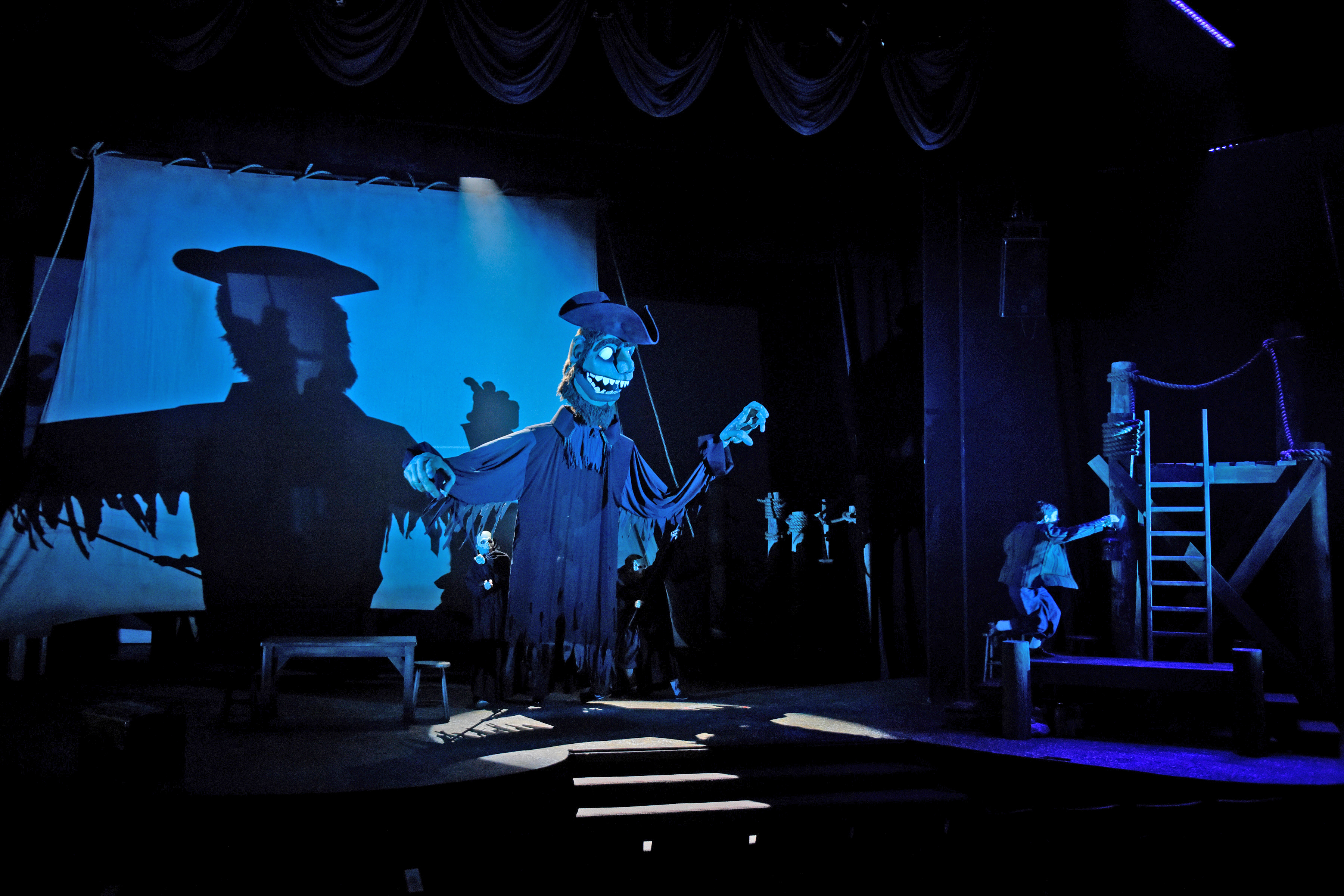 How is puppetry being used to tell this story?
After workshopping several ideas and multiple years of writing and rewriting the script, we decided that creating and utilizing nontraditional puppetry would be the perfect way to dramatize both nightmare and fantasy sequences that occur in the play. As a result, like the young character Jim Hawkins, audiences will be astounded and shaken by the unexpected, larger-than-life nightmare of the one-legged pirate named Long John Silver. They will experience the magic and beauty of a night sky full of constellations that come to life in a way never before seen on stage. And finally, through the use of animatronics, they will enjoy the antics of Long John’s iconic parrot. 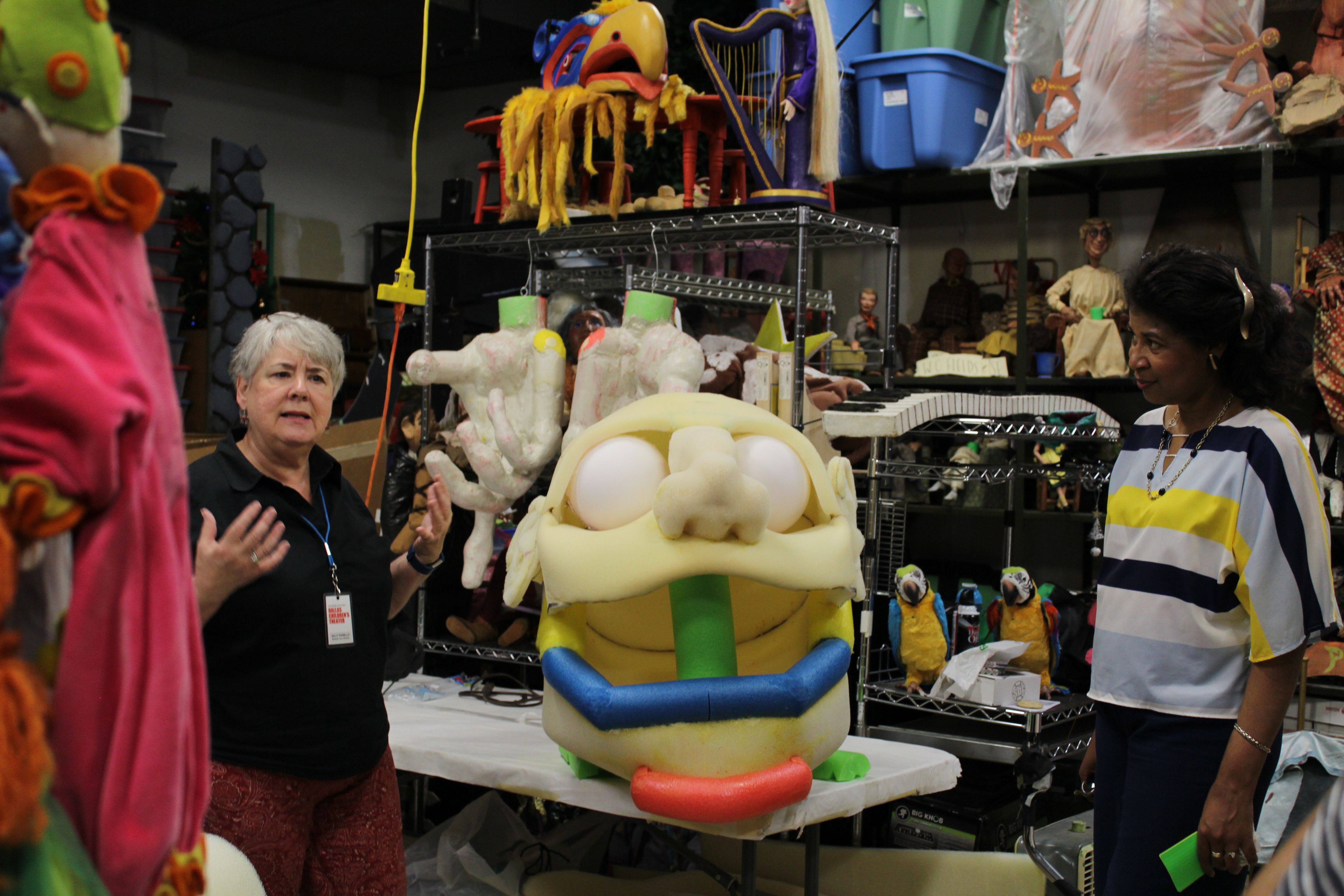 Please describe the puppet in these pictures and what went into making it.
The head that you see in the picture, along with its hands that Doug and I are holding, are actually the beginning stages of the giant Long John Silver puppet that comes to life in Jim Hawkins’ nightmare and serves as a foreboding of the infamous pirate’s true character. As with all creations for the stage and screen, puppets are first designed on paper or a computer. Since this puppet is more than twice the size of a normal human and the head is made out of reticulated foam (outdoor upholstery foam), a small model had to be made in order to devise a pattern for creating the proper shape. It’s always better to create something in miniature at first so that you don’t waste time and expensive materials trying to figure things out in full size. Also, you might find that you want to make some changes to the final design before it’s too late. Once the smaller pattern shapes are made, they are then enlarged and laid on the foam for cutting. 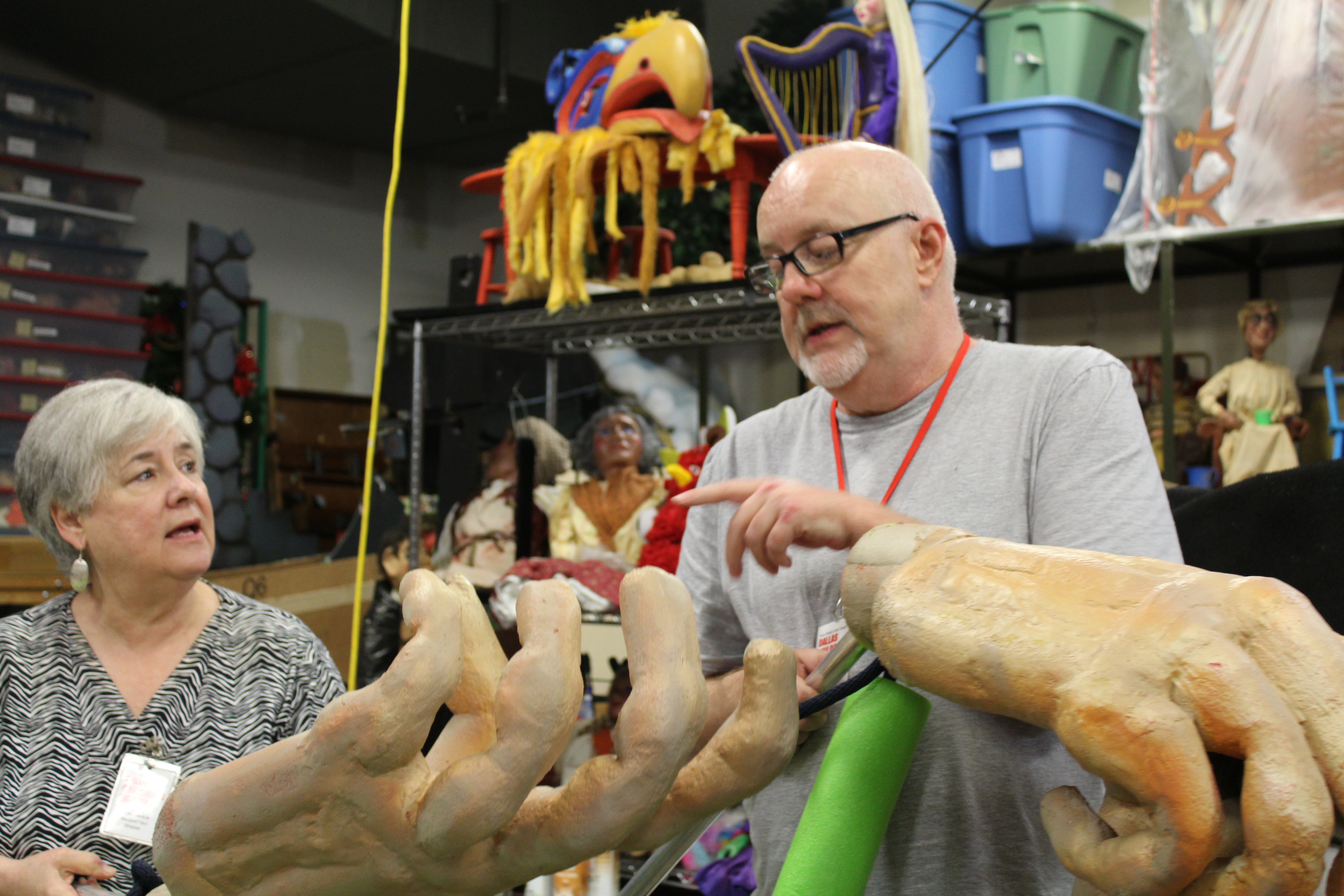 The cut pieces of foam are then glued together with contact cement creating the basic shape you see here. The eyes are fashioned from hollow plastic balls. Other structures are created using pool noodles, which are a great product to work with and very light weight. Weight is extremely important when you’re building a 15-foot-tall puppet that has to be puppeteered easily about the stage on long poles. With the addition of more sculpted facial features and paint, the puppet begins to come to life. Once the hair, beard, gnarly teeth and ghostly body are added, this Long John really takes on the scary visage we aimed to create for Jim’s nightmare. We certainly hope the audience thinks so as well and enjoys him as much as we do.

What is most exciting to you about this project? 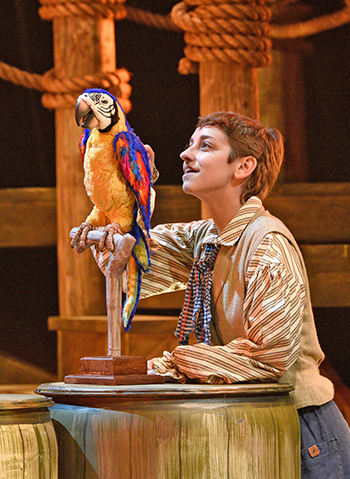 The most exciting part of this project was working together with other artists of different disciplines to create something special and unique, something that no one had ever seen before. From the beginning, there were no bad ideas. We were only limited by the boundaries of our own imaginations. We had time to explore different ideas and concepts, to figure out how we could best come together and make the most dramatic contribution to the telling of the story. It is not often that theatrical artists have this opportunity in the creation process. The ongoing discussions and workshops truly gave us time and inspiration to think outside of the box and create some magical theater!

Why do you think families will enjoy this production?
I know audiences will enjoy this production because it has everything in it that one could want from their entertainment. It has heroes and villains; pirates, swordplay and treasure; comedy, drama and adventure on the high seas – all of the things that make for a great theater experience. But even greater, this production has been completely reimagined to tell the story from more than one character’s perspective. We all find out things we never knew about these iconic figures. The story unfolds on a beautiful set and throughout the theater. The audience is often right in the middle of the action with shipboard acrobatics taking everyone’s breath away and unexpected puppetry bringing magical and unforgettable images to life. I know that one could say I’m biased, but I believe that TREASURE ISLAND REIMAGINED is a fantastic show for everyone! 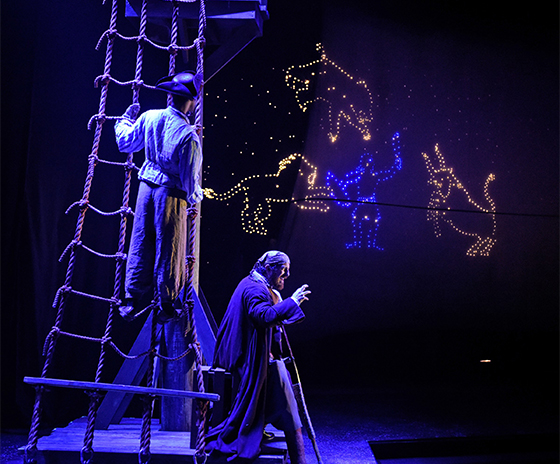 Can you guess the names of all of the constellations in this photo? If not, you should come see the show! 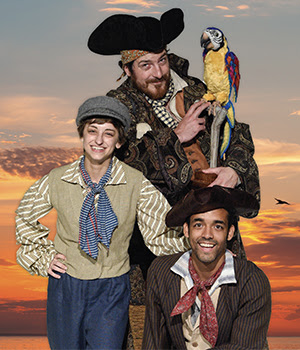