56 years after it was first published, Madeleine L’Engle’s novel remains a sensation… 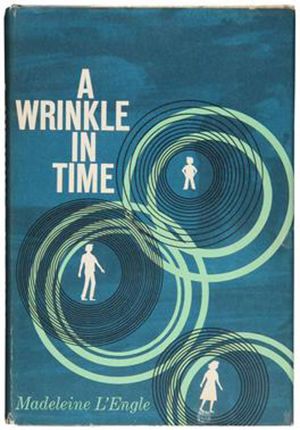 When I first read Madeleine L’Engle’s A Wrinkle in Time, I probably didn’t realize that it was a ground-breaking novel, I just knew that I really liked it. Now, as I think about A Wrinkle in Time, I’m amazed how much persistence and determination it took just to get this book in readers’ hands.

L’Engle was spurned 26 (!) times before a publisher was interested in her book. Despite overwhelming rejection, the book was a hit with readers and hasn’t been out of print EVER (and still continues to be a required-reading pick for teachers all across the country). It earned the prestigious Newbery Medal (among other awards), but was also deemed controversial and banned (even 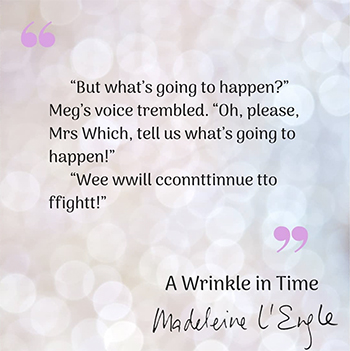 listed by the American Library Association as one of the “100 most frequently challenged books” for decades). The book was considered a first of its kind for children (she was told that science fantasy wasn’t appropriate for her intended audience), and L’Engle had to fight for her story’s survival– and we are all so fortunate that, like the book’s heroine Meg, L’Engle was victorious!

Learn more about the history behind A Wrinkle in Time at the following sites:

We invite you to come see for yourself why this story of good versus evil has withstood the test of time. Dallas Children’s Theater’s Teen Scene Players present A WRINKLE IN TIME.

It was a dark and stormy night when Meg Murry’s journey began. Mrs. Whatsit, a mind-reading celestial being, arrives to tell Meg about the evil forces that are holding her missing father prisoner on another planet and the existence of a tesseract – a sort of wrinkle in space and time – that will help her save him. Mrs. Whatsit and two of her unconventional friends (Mrs. Who and Mrs. Which) transport Meg along with her super-genius younger brother Charles Wallace, and friend Calvin O’Keefe through the fifth dimension on a quest to rescue her father and free the universe. This groundbreaking sci-fi/fantasy tale captures the classic struggle between good and evil, the power of love, and the value of individuality. Teens can save the world!