Meg Murry may not be perfect, but she still can save the day… 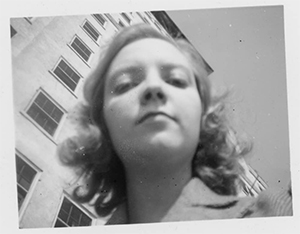 A Wrinkle in Time is a book written by a woman with a teenaged female protagonist and published on the cusp of the women’s movement – I just love that fact! Meg Murry was one of the very first strong young female protagonists, with some of the character’s details based on Madeleine L’Engle’s own struggles in her youth. A first for its time, Meg isn’t an idealized girl: she’s self-conscious, stubborn, quick to anger, and just different from everyone else. But it’s these so-called faults, as well as her love for her family, that helps her defeat evil when no one else, not her father or brother or friend, can. 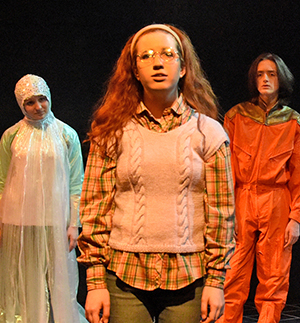 DCT’s Meg, played by Hannah Moore, is flanked by Mrs. Whatsit, played by Georgia Rose, and her father, played by Sam Hurley, as she contemplates the journey to save her brother, Charles Wallace, from IT.

I love that DCT’s production is performed by a youth ensemble – the perfect age to be inspired by a character like Meg. If you want to experience a story about overcoming adversity, good triumphing over evil, and teens saving the day, then this show is for you!

If you’ve felt a connection to Meg Murry, you’re not alone. Read about how others were also captivated by this powerful female character:

Rereading “A Wrinkle in Time,” After A Childhood Enthralled by Madeleine L’Engle

Check out Dallas Children’s Theater’s Teen Scene Players as they present A WRINKLE IN TIME.

It was a dark and stormy night when Meg Murry’s journey began. Mrs. Whatsit, a mind-reading celestial being, arrives to tell Meg about the evil forces that are holding her missing father prisoner on another planet and the existence of a tesseract – a sort of wrinkle in space and time – that will help her save him. Mrs. Whatsit and two of her unconventional friends (Mrs. Who and Mrs. Which) transport Meg along with her super-genius younger brother Charles Wallace, and friend CalvinO’Keefe through the fifth dimension on a quest to rescue her father and free the universe. This groundbreaking sci-fi/fantasy tale captures the classic struggle between good and evil, the power of love, and the value of individuality. Teens can save the world!