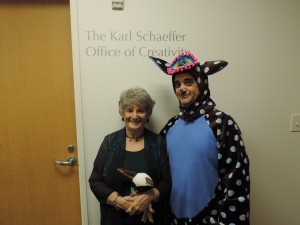 Every mom wants to create a place for her kids to play safely, and explore the worlds that exist only in their minds.  Karl Schaeffer’s mother Barbara is no different, and now that her son is grown up, she is still making sure he has a creative space for play. 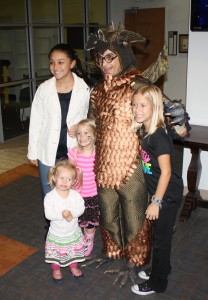 Barbara Schaeffer knew her son Karl was destined to be an actor when he was in junior high.  He was always talented, determined, and full of ingenuity.  It’s no wonder he has made his professional artistic home at DCT, which has proven to be the perfect incubator for his unique creative mind to flourish, allowing Karl to create some of DCT’s most memorable performances.  His mother couldn’t be more proud.

Barbara Schaeffer explains, “My husband and I have always been very proud of him and his accomplishments.  When Karl said he was going to college to major in theater, my husband with his European background said, ‘How is he going to make a living? As an actor?’ Well he has, and he’s done it very well.”

As a DCT teaching artist, Karl has created a video production program, works with Eagle Scouts, and takes his talent out into the schools to work with kids all 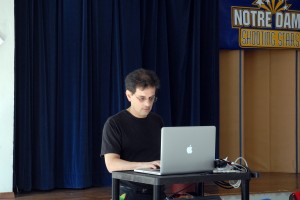 To honor her son and his thirty years as a company member at Dallas Children’s Theater and the first employee, Barbara has made a generous donation to create a permanent memorial for future generations.  The Karl Schaeffer Office of Creativity now reminds everyone of the mark Karl has made at Dallas Children’s Theater. It is the perfect way to celebrate his lifelong place to play.

Barbara constantly praises Karl’s determination and claims that while she and Karl’s father provided him with materials and drove him to the places he needed to go while he was growing up, she is certain that Karl achieved his success on his own. When she sees Karl perform, however, she is immediately transported back to his childhood.  Barbara smiles as she says, “I just see the little kid that he always was, clowning around, acting silly, and just doing and loving what he does.”

Karl’s one man performance in BALLOONACY is an example of what he does best.  It is Karl and his co-star, a tenacious red balloon that insists on becoming his friend.  It is directed by Dick Monday and features physical comedy, no spoken words and a tender spirit.  It was created for squirmy toddlers who love to play, but is also perfect for the young at heart who might need a friendly reminder of how to play.

Barbara, like every proud mom, also shared some family photos with us: 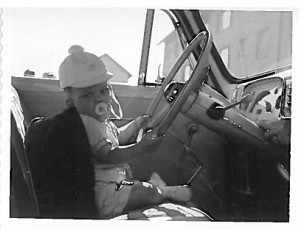 That’s Karl. He’s got a little hat on and of course his pacifier and that’s the first car we owned. it was a Opel Rekord that we brought to the states when we came from Germany. He’s sitting in the parking lot of the commissary doing his first driving lesson. 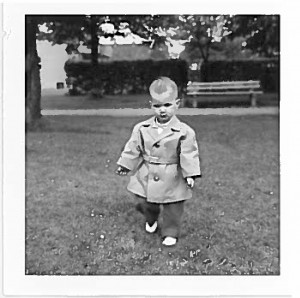 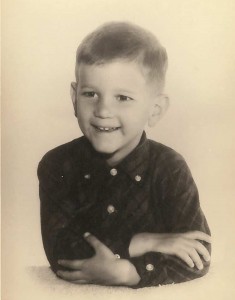 This is one of my favorite pictures, that was taken when he was in Kindergarten.  Five years old.