I had the pleasure of seeing the world premiere of BALLOONACY at Children’s Theatre Company in Minneapolis with Robert Dorfman who had started his career as a clown with the Ringling Brothers.  So when I heard that Dick 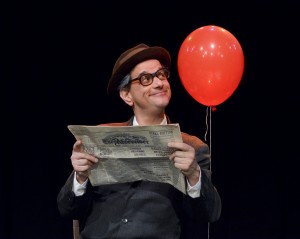 Monday, one half of the renowned clown team Slappy and Monday, was going to be directing DCT’s production of BALLOONACY, it made so much sense.

BALLOONACY is a special play.  Tender, hilarious, and while it was specifically created for squirmy toddlers, there is something in it for everyone.  It’s for everyone who has had and lost a friend, everyone who had a disappointing birthday party, everyone who has felt lonely, and everyone who loves to play or has forgotten how to play.  Dick Monday visited with us about BALLOONACY, and I think his thoughts speak for themselves.  Here’s what Dick had to say:

“Saying that clowning and physical comedy is just for kids is like saying that adults don’t know how to play. They try to act mature and logical until they get sucked into the wonderfully ridiculous world of the theater. We all yearn to play. The problem is giving yourself permission to drop your armor and dive in. Kids don’t seem to have that problem. Adults often do. ‘I can’t take the chance of looking silly. What would people think?’ Can you imagine a kid saying that? Physical comedy is for everyone. It is storytelling for everyone, using the face and body, the heart and soul, with no words to get in the way.

Physical Comedy is a Universal Language 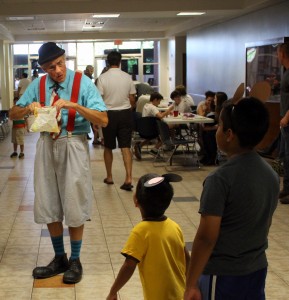 Dick Monday interacting with kids at a DCT performance.

BALLOONACY is a story that is told without words. When film emerged over a century ago, there were no words spoken. They were silent films. They told stories by using pictures, moving pictures. Then there was radio, and we listened to stories with no pictures whatsoever. Now we are very used to having both words and pictures. The broad comedy of clowning breaks down the story as simply as possible and lets the character shine bright as he does his intricate dance of action, emotion and surprise.

All comedy has one thing in common, and that is truth. BALLOONACY features a man who has gotten out of the habit of playing because there hasn’t been anyone around to play with. We have all felt the emptiness of being by ourselves. But when you do it for a while, it becomes the world you are used to. So when the chance to play comes along, you may not be ready. Luckily, in our story, the friend that comes into our character’s life will not take no for an answer.

Through this persistence, our Man discovers the joy one can have when relating to another. And the truth is, even a balloon can be a friend. 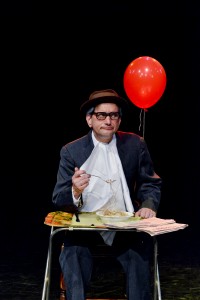 In our story, a man interacts with a balloon and discovers how to play again which brings him great joy and ultimately friendship. Age is certainly relative. I’ve encountered young people who had difficulty playing and old people who could jump into the fun in an instant. Anyone can play, and age is by no means the common denominator. The willingness to interact seems to me to be the key issue. The man in our story fights against interacting at first, not because he is old, but because he is set in his ways and doesn’t want to interact. There is an honest discovery in the fun that can be had through interacting with a friend and I know this can happen to anyone at any time in their lives.

I’ve been performing for family audiences as a clown for forty years, and I’m always surprised when an adult comes up to me after a show and says, “I think I liked it as much as my kids”.  I’m not surprised that they enjoyed the show as much as their kids, I’m surprised that they thought they wouldn’t. I think we decide at some moment in our life that certain things are for kids. Things like: ice cream, cookies, riding bikes, amusement parks, swimming holes, sand castles, circuses, clowns, a balloon. As an adult, I still love all these things and I see no reason why anyone else wouldn’t feel the same way.”

Dick Monday will be directing DCT’s own physical comedy genius, Karl Schaeffer in BALLOONACY. In addition to the performance, families will be invited to join in age-appropriate activities accompanied by a DCT teaching artist that will exercise your imagination, your body, and your powers of observation.  It’s going to be unlike any play you’ve ever been to, and is going to be the perfect first exposure to live theater, or a great reminder of why we call it a “play.”

Remember, this is a limited engagement with limited seating, so act fast! 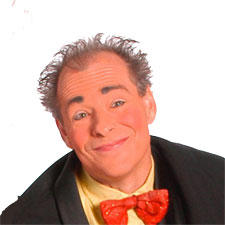 Dick was the Director of the Ringling Bros. and Barnum & Bailey Clown College from 1994-1997. During this time, he created and directed all the clowning for the Greatest Show on Earth. Dick is one of the featured clowns with Lone Star Circus and serves as that show’s Director of Clowning. Dick was recently one of the subjects of the acclaimed book, Guiding Lights, about great mentors and teachers. Dick and his partner Tiffany founded the New York Goofs in 1998, a theatrical clown troupe that has produced four off-off Broadway shows and been featured in every major festival in the NY/ DC area. In 2004, Dick created Slappy’s Playhouse in Dallas, TX, writing and producing all kinds of family entertainment.

Special thanks to Dick for sharing his thoughts with us.  To learn more about Slappy and Monday’s services, go here.