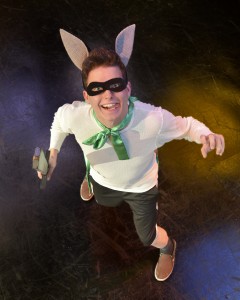 Editor’s Note:  The wonderfully sweet story of Skippyjon Jones has extra special meaning for actor Zak Reynolds who plays the lead role in the play.  At the same time that he dons the persona of this imaginative Siamese kitten that ventures to far off places, his mind must also deal with his day to day. We are so grateful that Zak was willing to share his story of being recently diagnosed with Alopecia Areata and how the arts motivate him. Here, in his own words, is Zak.

I was officially diagnosed around the beginning of August, right after DOGFIGHT at WaterTower Theatre. Throughout the rehearsal process and run of that show, my hair was starting to just fall out as I would bathe. Luckily, I was playing a Marine from the Vietnam era so it wasn’t so hard to hide that I was losing hair, due to my high n’ tight hairstyle. But there were still modifications I had to apply on my scalp with makeup. That was when all of it hit me pretty hard. 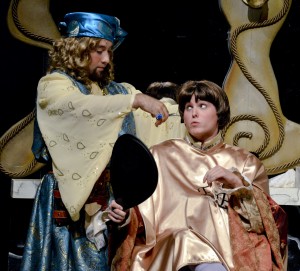 My hair had been slowly coming out months before, but I had thought nothing of it; just thinking that a few strands of hair were coming out. Alas..

Immediately, after the diagnosis, I thought about how my theatrical career would be affected. Friends who are directors and work in the industry on a much higher scale than I do, gave me so much hope, telling me that it wouldn’t and shouldn’t affect my career as an actor. Even though they were telling me all of this feel good information, it didn’t stop me from thinking the worst about it. “How am I going to get a job with this?” “Will I have to get new headshots?” “Will I have to focus on the technical side of theater more than being on stage?” etc…

For example, with SkippyJon Jones, all of the original promo shots that were done months ago had me with a full head of hair. Not to say that they modified anything whatsoever, but I wouldn’t doubt that it was taken into consideration on some scale to make sure the costumes/setting didn’t reveal too much of my “disease”, which I hate calling it a disease.

I still ask myself these questions today and it is still a painful to think about the answers to those questions. Alongside the career, it effects my daily life as a restaurant server and an independent human. “Am I attractive?” Unfortunately, I still can’t look at pictures of myself with any sort of hairstyle I liked because it legitimately puts me into a terrible state of mind. I don’t think I’ve ever told anyone that yet…

Thanks to Dr. Davis at Davis Dermatology, he has given me a lot of hope that my hair will come back in time, but I will need to be very patient with it. I don’t know how long it will be until my hair grows back but when it does, I’m going to give it a nice shampoo. 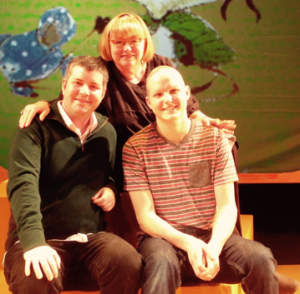 My friends and family have been the entire base of what kept me on my feet, continuing to audition through this crazy time. The gala that Ashley Gonzales, Amy Stevenson and Gideon’s Feet* had for me to raise money for my medical bills was the most heartwarming, unbelievably touching event. The community raised over $1400 for my bills to be taken care of. I am in love with the people I surround myself with and the people I am soon to meet, truly.

All I can do is take the advice, the meds, and the love that is given to me and use it to my advantage. If you are in the arts and have something that you think may hinder you from continuing your form, keep your head high and surround yourself with anyone and anything that makes you happy. Work as hard as you can for what you want and stay humble while doing it.

Aspire to be the best at whatever you choose to be.

*Gideon’s Feet is a 501 (c)3 non-profit corporation that provides support, financial help and service opportunities for artists in need.